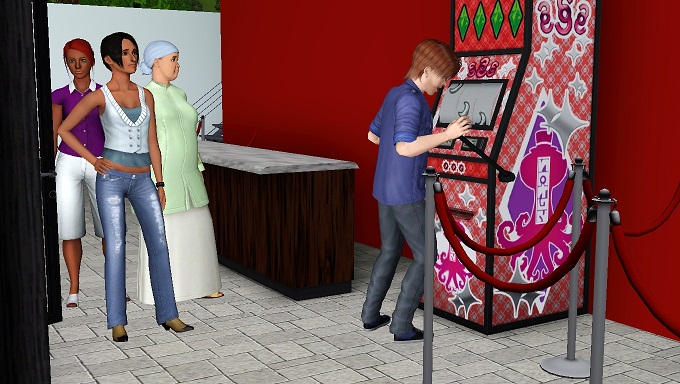 Lee took a step inside. Breathed deeply as he approached the slot machine. His hands shook as he reached for a quarter to fit into the coin slot. His hand rested on the lever. He felt trapped. Torn between pulling the lever and running away. His mind was screaming at him pull the lever. That this time he would walk away a winner. He looked up saw a woman with long reddish hair. He knew it wasn’t Amanda but her face was there before him, staring at him with unimaginable grief. His hand dropped to his side. He couldn’t disappoint her like this. Not again. He owed her a lot for the understanding way she handled the mess he had made of their finances the first time. He couldn’t fall into this trap again. Someone tapped his shoulder “excuse me, are you going to play or not?” an elderly man asked from behind him.

“No sorry,” he mumbled shaking his head as he practically ran from the hotel. He didn’t stop running until he made it back to his desk. He was late but not as much as he would have been if he had stayed to play.

On his afternoon break he looked up ways to conquer the urge to gamble on his phone. There was a meeting for gamblers anonymous that night at six. He was already staying late to finish some reports for his boss he could make the meeting if he didn’t go home first. He decided he would check it out. What could it hurt? He breathed a sigh of relief knowing he was taking a step in the right direction.

He walked into the meeting not sure what to expect. Several people glanced in his direction but no one asked any uncomfortable questions. He sat down and listened to the speakers. All of them shared their stories of how they had become addicted to gambling and what made them seek help. He hadn’t thought about his condition as an addiction but it started to make sense the way it controlled him. For the first time he was among people who understood his struggle. Glancing at the clock he realized it was after nine and he should have been home hours ago.

Walking into the house he found Amanda reading on the couch. She barely looked up when he walked over and sat beside her. Without looking up she said “dinner is in the fridge if your hungry.”

“I’m fine,” he told her remembering the buffet at the meeting “where’s the kids?”

“Asleep” she told him slamming the book closed “where were you?” she demanded.

“I told you I had to work late,” he told her refusing to get upset.

She stared at him a moment before smiling “sorry I forgot.” She leaned into him “I hope with all that overtime they’re not over working you.”

He squeezed her tight “it’s a big project.” He wasn’t sure why he didn’t tell her about the gamblers anonymous meeting. He could have right there but he hated to disappoint her. He wanted to prove he could overcome this on his own. That she didn’t have to worry about him.

She tilted her face up towards him “you seem different,” she mused “more relaxed then you have been in a while. Did something happen?”

“No nothing, why?” he asked trying to sound innocent.

Shaking her head “nothing I just thought something had been bothering you lately. I guess I was wrong.”

“Come on sweet heart let’s go to bed,” he said kissing her nose.

Her eyes brightened as she took his hand and let him lead her to their room. They both slept soundly for the first time in weeks. 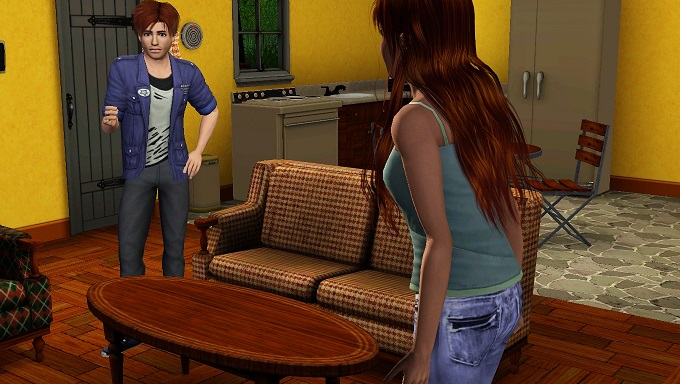 This went on for several months.. Lee kept hiding his meetings with lies about having to work late. Until one fateful night when all his lies caught up with him. He entered the house to find Amanda waiting for him. Instead of the usual smile and kiss he received an icy stare. Pretending not to notice he attempted to walk past her to the stairs.

“I called the office…” her voice stopped him with one foot on the stairs. She stood up crossing her arms as she turned towards him “I know you weren’t working late.” Walking up to him anger snapping in her dark brown eyes “who is she?”

“She who?” he asked confused. It took him a moment to realize what she thought was happening. “It’s not what you think.”

“Then tell me what it is,” she cried “what’s so important that you have to lie to me?” Her eyes widened as her hand flew to her mouth a look of horror in her eyes. “Please don’t tell me you’re gambling again. How much this time? How much do you owe?”

Trembling Amanda sank to the floor feeling a crushing weight of despair over take her. She felt Lee drop beside her trying to comfort her. “Please tell me what’s going on. If it’s not an affair and your not gambling then why can’t you tell me?”

He exhaled all the pent up breath he had been holding “Amanda you know I love you, right?”

She nodded refusing to look at him “you tell me that but I’ve been so afraid lately.”

A slight shake of her head was the answer he least expected “you’ve been so secretive.” She lifted tearful eyes to him “my mom was secretive before she left my dad. I remember how she kept to herself, then she was gone.” 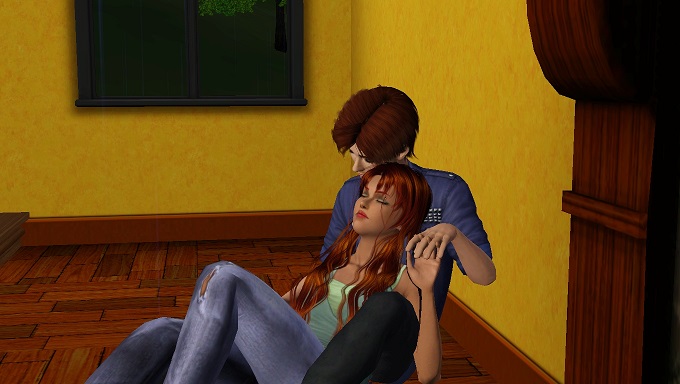 “I’m not going anywhere. I’m not leaving you,” he told her firmly “I love you.”

Sighing he knew he had to come clean and tell her “I’m ashamed….”

“Ashamed?” she questioned “of me…the kids?”

“No honey not of you or the kids,” he shook his head biting his lower lip “of me. I’m ashamed of me.”

“I don’t understand,” she said between sniffles. She felt him pull her close wrapping his arms firmly around her. 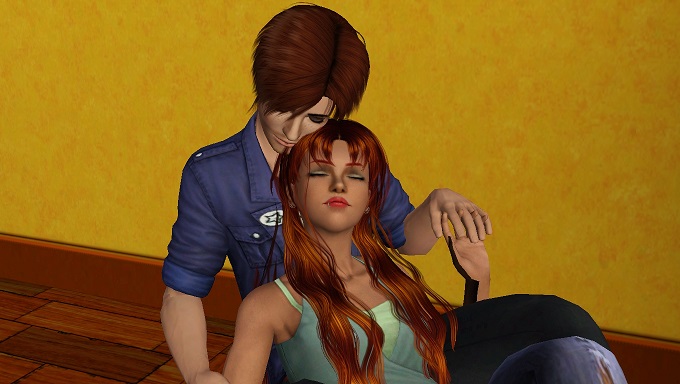 “I should have told you and I’m sorry,” he confessed his words tumbling out of him “the new hotel put in a slot machine in their lobby.” She gasped looking up at him “I walked by everyday on my lunch break. I…I…went and put a quarter into the slot machine. I had every intention of playing.” He covered his face with his hands “I was so weak Amanda. I wanted to pull the lever more than anything I ever wanted before. I wanted to feel the rush of wondering whether I’d win or lose. Then I thought of all the things we could do if I won the jackpot. I could win back some of the money I lost.” His voice faded as he felt her draw him close “I’m sorry you married someone so weak…”

“But you didn’t pull the lever did you?” she asked looking up at him.

He shook his head “no I couldn’t bring myself to do it. I kept thinking about you and how I didn’t want to disappoint you again.”

“Oh Lee,” she reached up and stroked his face and hair “I love you so so much.” He gave her a look of confusion “don’t you see? You’re not weak. It took strength to run from temptation. I’m so proud of you.”

“You’re….proud…of me,” he said his voice broken full of wonder “I’ve been so afraid you’d be disappointed in me.” 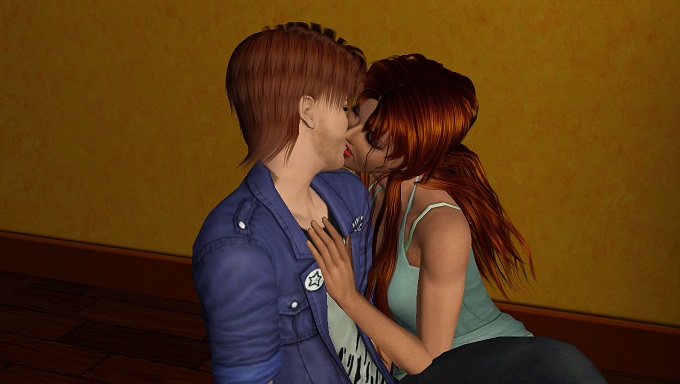 She pulled his face down to hers “there’s very little you could do to me to make me disappointed in you.” She kissed his lips gently “so what does this have to do with staying out so late?”

“I’ve been going to Gamblers Anonymous meetings,” after he said it he averted his eyes”I know I should be able to do this on my own…”

“Who says?” she demanded sitting up “are the meetings helping?”

He nodded “they make me feel like I’m not alone in this struggle. That other’s are coping successfully without gambling and it gives me hope that I can too.”

“You don’t mind me going to these meetings?” he asked looking up at her.

“Of course not,” she leaned into him “I’d much rather have known about it before I started imagining you sneaking around on me but I’m relieved that my worst nightmare didn’t come true.”

He smiled as he kissed her nose “you were jealous.”

“Don’t be silly,” she denied laughing.

“Come on admit it” he said playfully “you were jealous.”

“Darn right I was,” she said when he had pinned her to the floor “you’re mine now and for always.”

“I can handle that,” he said capturing her mouth with his knowing he was right where he belonged.