4. Do they give out candy or do they eat it all themselves? Favorite candy?

Only if they’re home. Eddie would love to sit at home and hand out candy but Rory always has other things planned. First off trick-or-treating with Hannah. Than there’s the Halloween party at Trent’s house with the band. Eddie really doesn’t eat candy so he doesn’t have a favorite.

5. What is their costume this year, and what have they been in the past?

This year they’re going as a king and his faithful knight. In previous years they have gone as cowboys and indians, 1920′s mobsters, etc. Eddie really likes going as a couple and works hard at finding corresponding outfits.

6.  In a haunted house, are they the one screaming or the one telling everyone “those masks don’t even look real”? (Same goes for watching scary movies and judging the “scary effects.)

Eddie in a haunted house, yeah right! If Rory ever was able to talk Eddie into going into one with him he would have to hold his hand all the way through. He might also need ear plugs or suffer permanent hearing damage from all the high pitched screaming his husband would be doing. Before they got to the end Rory would have to carry him out because Eddie would probably faint.

Rory likes watching scary movies with him. Eddie will crawl into his lap and hide his face in his shoulder. Rory doesn’t remember the last scary movie he was actually able to finish because once Eddie’s in his lap one thing leads to another and they wind up doing other things….

7.  Was Halloween a big part of their childhood? Why or why not?

Eddie doesn’t remember really doing much for Halloween as a kid. If it weren’t for Rory he’d still not do anything. He’s not much into scary creepy things and it’s a really scary thing to think his daughter is getting candy from strangers. No candy is consumed until it is thoroughly inspected.

5) Something he/she is self-conscious about (of their body)

His ears. He thinks he had big dumbo ears. He wears his hair a little long so as to distract people from noticing his ears.

6) Biggest turn on of the opposite/same sex

He loves a well toned chest and abs. He hasn’t seen Rory shirtless yet but he imagines he won’t be disappointed.

He’s definitely a cat person. He loves cats and hopes to rescue one from shelter some time soon since he and Rory have broke up.

How would Eddie react if Amber showed up with a sincere apology for what she’s done? Would he freak out or hear her out?

Amber apologize! How in hell does someone apologize for what she did to me? There is no way I would believe anything that came out of her mouth. Not only did she give me permanent scars mentally she also abandoned her children. Our children. How can she even attempt to apologize for that? There are no words to describe how wrong I think that question is. I feel sick even thinking about her showing up on my doorstep.

No I won’t calm down. You have no idea how awful this makes me feel. How my skin crawls even thinking of seeing her again. I don’t ever want to see or hear her voice. Oh God I think I’m going to be sick.

“Honey it’ll be alright. You have me now. She’ll never hurt you again.”

Turning to the paparazzi: to answer your question no I wouldn’t waste my time or energy listening to a damn word she had to say. Why am I even wasting my time answering this ridiculous question? Get off my property and never come back!

3.  What is your character’s least favorite memory?

The night he slept with his best friend. He wishes he could change the where, the when the who …. basically everything about that experience. It was his first and only time and it wasn’t good what little he remembers….

At the moment no and if they did Eddie wouldn’t know about it. If he found out his first instinct would be to run as far away as possible. His reaction has to do with what happened between him and his best friend in college.

A stroll along a deserted beach at sunset. Maybe a cuddle on a beach blanket gazing up at the stars. Ending with a good night kiss. He can be a bit of a romantic if given the chance and things progress at comfortable pace.

7.  How does your character feel about their name?

He hates it. He won’t change his name though because his dad had  reason for why he choose that name to give him and he doesn’t want to hurt his dad’s feelings by changing it. He does prefer Eddie over Edward or Ed though.

11.  How did your character meet their best friend?

His best friend was his neighbor who he grew up with in Barnacle Bay. Since that night in college things haven’t been the same and they haven’t spoken since that night.

14.  What is the cutest thing your character has ever done?

Eddie reached a tentative hand out to touch his step-moms protruding stomach. “Does it hurt?” he asked.

Shaking her head laughing she grabbed his hand and presses it to the spot where the baby was kicking “do you feel that? Your baby brother is saying hello.”

“You will one day, you and your wife” Lynn told him “you’ll be a good dad.”

“Eddie boys don’t have baby only girls can” Lynn explained.

17.  Does your character have any irrational fears?

He won’t under any circumstances eat or drink anything that he hasn’t made himself. It makes dating difficult but since he hasn’t dated much it hasn’t been a big problem yet.

18.  How would your character feel about having their life recorded?

It’s old hat. He has famous celebrity parents. Everything he or his family does is news so whether he likes it or not it’s a fact of life and he’s grown up with it.

22.  What is the worst thing your character has ever done?

Taking his neighbors car for a joy ride when he was fourteen. His best friend dared him to do it. It was fun until he saw the flashing police lights in his rear view mirror.

41.  Would your character want to have any children?

Yes he would. He may already have a child he doesn’t know anything about resulting from that night he spent with his best friend. If only he had any clear memories of that night.

42.  What would be your character’s dream career?

He would love to be a food critic if he could ever overcome his fear of eating someone else’s food.

44.  What is your character proud of?

He has always stayed true to himself despite being picked on and bullied for being who he is. Wearing some pink in any outfit he wears is his way of showing he isn’t afraid to be himself and that he’s not going to change for anyone.

54.  What is the saddest thing about your character’s life?

He doesn’t trust people easily and expects them to either disappoint or hurt him.

59.  What is your least favorite thing about your character?

That he was hung up on finding his real mom despite her leaving him when he was baby.

Biggest short term goal: Go home and put to rights his relationship with his dad. He feels he made a huge mistake when he left two years ago to find his birth mom. Now he doesn’t know how to tell his dad what he’s done.

Smallest short term goal: Getting his car fixed so that he can finish his journey home. Biggest obstacle is getting the money to fix it; although he knows he could call anyone in his family and get a loan no problem. He doesn’t avail himself of that option. It’s a pride thing. Everyone needs to learn to be self-sufficient.

Biggest long term goal: Find his one and only true and live happily ever after.

Smallest long term goal: Finding himself before he gains access to his trust fund on his twenty-fifth birthday.

His style is on the preppy side. He likes to look nice and even though he doesn’t have a high paying job he has been known to save his money to buy a certain name brand suit or shoes. Every outfit he wears has a splash of his favorite color pink on or in it.

Carmel mocha iced coffee. He can’t resist them and he adores anyone who makes the effort to either make or buy him one.

19. What do they think about before falling asleep at night?

He thinks about his family and how thankful he is to have them in his life.

20. Childhood illnesses? Any interesting stories behind them?

Chicken pox. He’s one of the unlucky few who has gotten it more than once. He has a small scar above his right eye from scratching his spots too much. It’s hardly noticeable but Eddie is self-conscious about it hence why he wears his hair long to cover that part of his face. 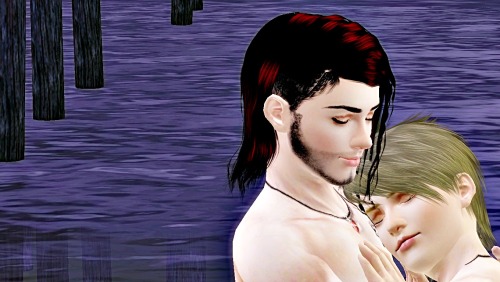 I don’t, don’t wanna take you home
Please don’t, don’t make me sleep alone
If I could, I’d only want to make you smile
If you were to stay with me a while 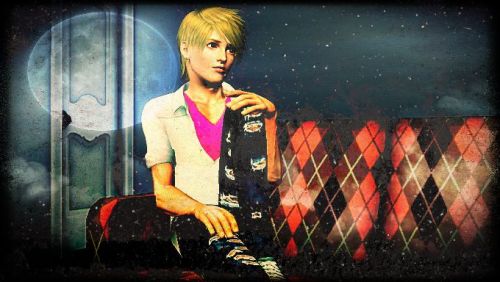 Catch your breath,
Hit the wall,
Scream out loud,
As you start to crawl
Back in your cage
The only place
Where they will
Leave you alone.
‘Cause the weak will
Seek the weaker til they’ve broken them.
Could you get it back again?
Would it be the same?
Fulfillment to their lack of strength at your expense,
Left you with no defense;
They tore it down.

The fearful always preyed upon your confidence.
Did they see the consequence,
when they pushed you around?
The arrogant build kingdoms made of the different ones,
Breaking them ’til they’ve become just another crown.