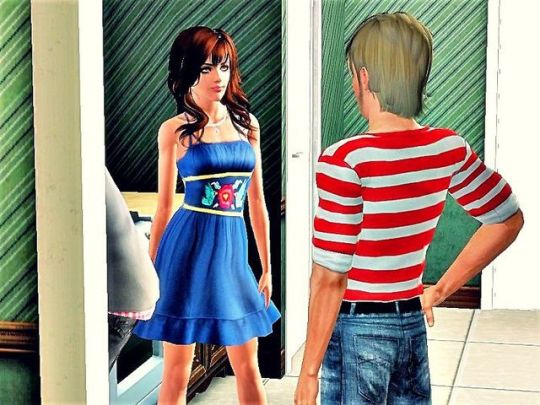 Tom woke up early but not early enough as it turned out. The bed was empty and so was the room. Groaning he rolled out of the warm blankets he’d been nestled in. Shuffling into the kitchen he leaned against the wall watching.

Faye was humming softly something that sounded vaguely familiar. She jumped a little upon seeing Tom standing there watching her. Her hand on her hip she demanded “what the hell are you doing there?”

“I thought we agreed you’d take it easy” he said sauntering towards her, taking the ladle from her hand.

“I’m not an invalid” she protested scowling at him.

“I never said you were” he smiled down at her. He could see the dangerous sparks in her eyes as she glared at him.

“You act like I am” she pouted turning to the stove. “Cooling relaxes me.”

“It also brings out your competitive edge” he took a spoon from the door to sample the contents of the pot. “Mmm good. I thought you were going to use oregano instead of basil.”

“If we’re going to run a restaurant together you’re going to have to let me make suggestions” he said calmly.

“This time” he raised an eyebrow. “What about next time?”

“Well…maybe” she grinned letting him pull her close.