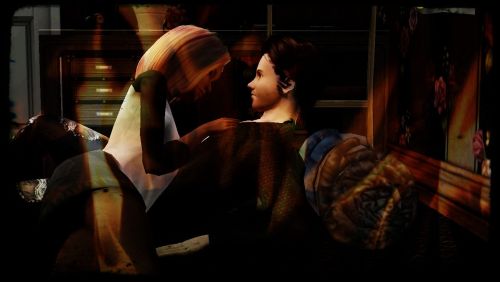 Frowning Gene looked around the dark room. The faint glow from the scattered candles making his heart pound in his chest. He moved to extinguish the flames.

Gene’s frown deepened “what happened to the lights?”

“Power outage” she replied coming up to his side.

Taking his hand before he could walk away Aimee leaned into him “we don’t need them. There’s plenty of light from the candles.”

“I really think we need the flashlights…” she reached up running her fingers through his hair causing him to lose his train of thought. She had a way about her that always had him melting and letting go of his concerns.

Pressing her body close she stood on her toes to reach his mouth. Smiling  a little as she enjoyed her moment of victory, the moment before she pressed her mouth firmly on his eliciting a moan from him. He knocked into the desk behind him knocking over a candle that went unnoticed in the heat of their kiss.
She followed him to the floor where she continued to kiss him. He moved his face away from her hungry kisses sniffing the air. “Do you smell that?” he asked “is something burning?”

Sighing she sat up sniffing “Oh no…” she murmured seeing the small fire from the turned over candle on the desk.

“Shit” Gene cried staring at the flames paralyzed by the growing fire.

Moving quickly Aimee soon had the flames under control. Turning to Gene noting his rapid breathing and ashen complexion she wrapped her arms around him saying “no harm done. Just some papers we didn’t need anyway….” Looking closer into his eyes she asked “hey what’s wrong?”

Licking his lips still staring at the charred spot on the desk he stammered “I…I…hate fire…” He ran a hand through his hair shaking a little “I’ll get the flashlights.”

Aimee nodded letting him go, extinguishing the candles. She didn’t understand but now wasn’t the time to press for more information. She knew eventually he’ll open up and tell her everything she needed to know.